"For the population of Thun, the central location of public skating offers a special quality"
Thus, the description of the starting position concludes in the competition program. In fact, it would be difficult to find an ice sports center in such a central location elsewhere. However, the historically grown conglomerate today creates a suburban atmosphere almost exclusively defined by driveways or hidden entrances.

So it is the core task of the project to create an actual center which does justice to its public character. This requires the pragmatic and radical separation of public and operating zones, starting from the ambient space to the innermost areas of use.

The big advantage of public access via the parking deck is the central access to the ice sports center. During the merger of the hockey stadium (Eisfeld I), the ice skating rink (Eisfeld II) and the curling hall, a generous entrance hall is created that connects the two storeys of the gallery and the ice rinks via a ramp.

In order to provide an immediate overview, to keep the paths short and to create the most compact possible volume for the ice sports center, it is proposed to move the Eisfeld II for the enclosure to the east. At the same time this allows the arrangement of a continuous and compact service tract west of the ice fields.

The advantage of the proposed, passing gallery floor is obvious. Thanks to the gallery, the public zone inside the ice sports center is also completely separated from the operating zone and the game operations. The grandstands of the ice hockey stadium are efficiently accessed from the middle position. Service rooms such as toilets, stalls, as well as multifunctional and fitness rooms find an ideal location and also the Eisfeld II gets a "stadium character" through the gallery. At the entrance, the bistro is prominently arranged in the gallery. It serves all functions centrally and is directly related to the cash register. The level of the ice fields is cleared for the here arranged cloakrooms with wet cells and the necessary material, technical and workshop space.

The building conglomerate is to receive a clear identity and uniform appearance. The proposed, compact building ensemble makes the individual parts of the building volumetrically still appear, at the same time it receives a uniform character through the continuous building shell of polycarbonate panels. This façade construction allows adequate protection against heat, light and noise. With a U-value of 1.0 W / m2K, a g-value of 0.5 and a sound attenuation of 20dB, the cost-effective facade system allows trouble-free operation at the suggested operating times and also in the warmer seasons. For this purpose, the existing hall roof and the new flat roofs are isolated. Lounges with a higher level of comfort are additionally isolated as house-in-house solutions. In its smooth, shiny appearance, the façade is reminiscent of ice surfaces and the printed pattern can be read both as an abstract pattern and as a symbolic reference to the use of the ice sports facility. 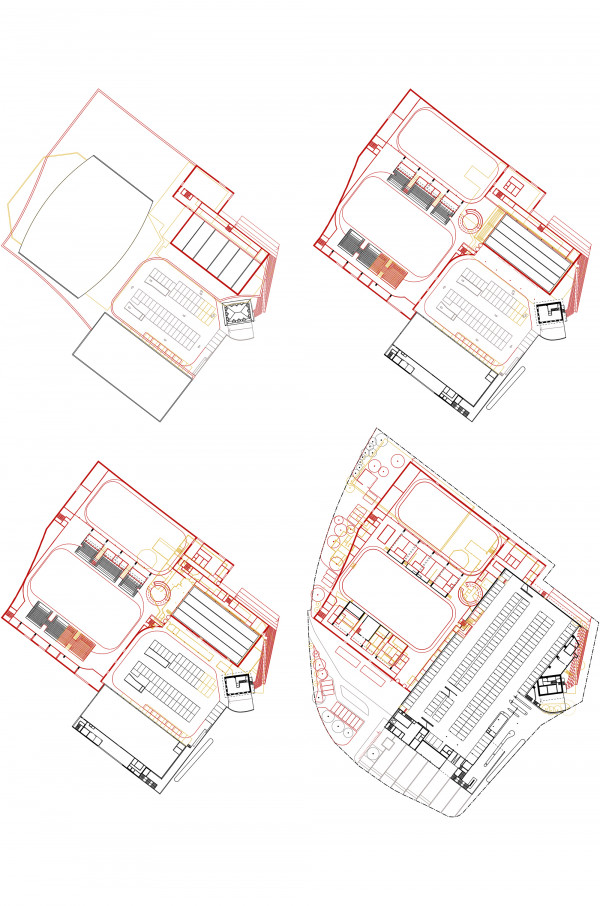 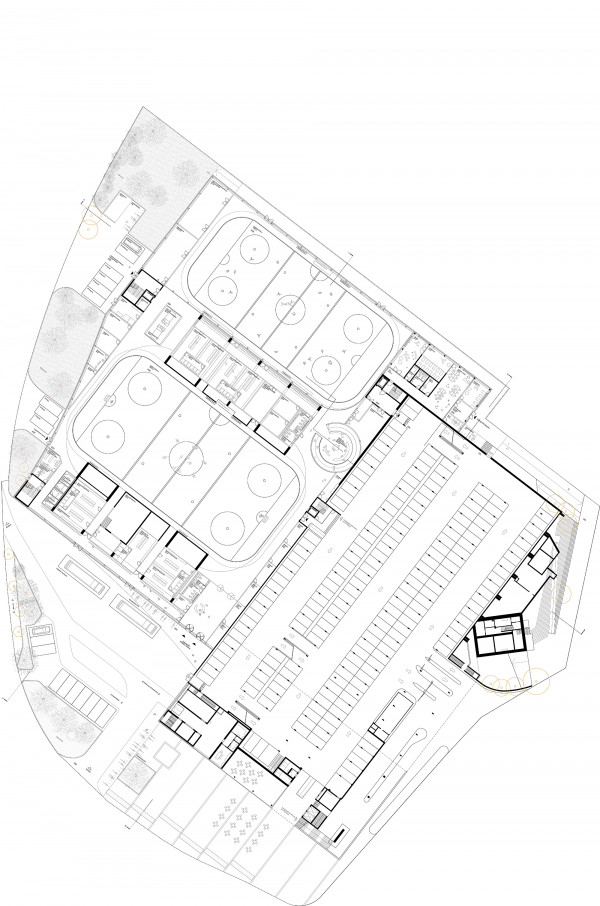 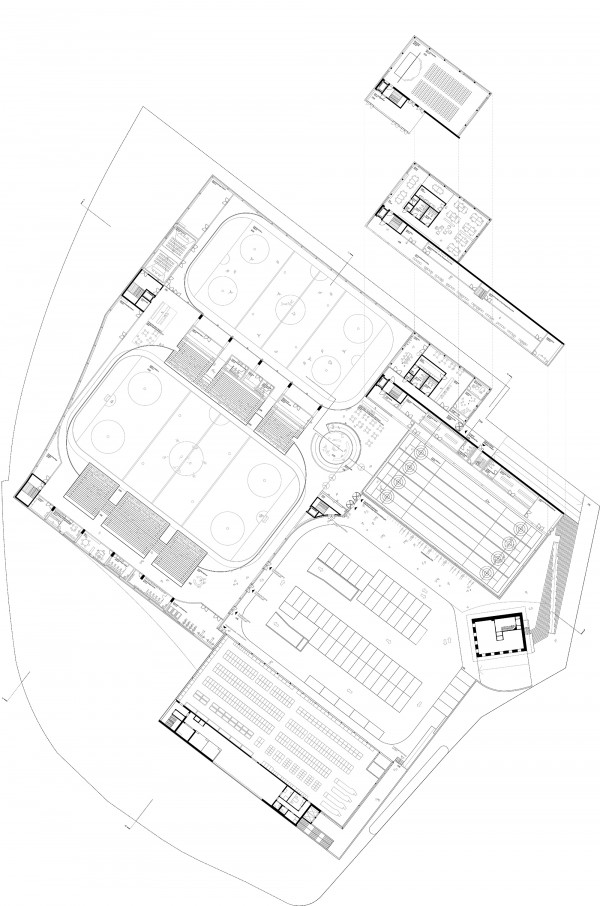 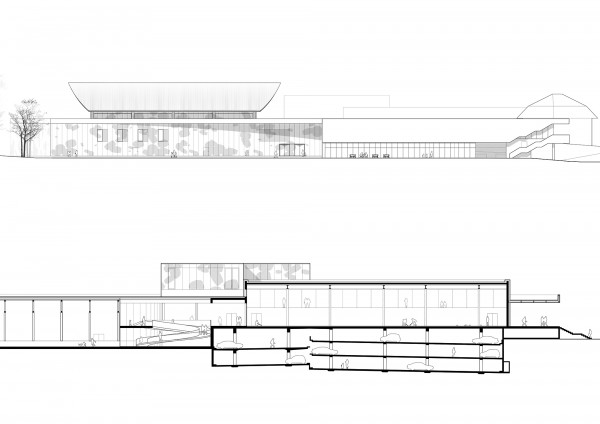 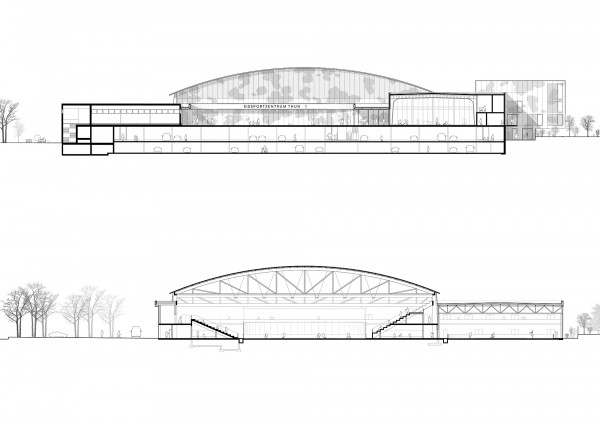 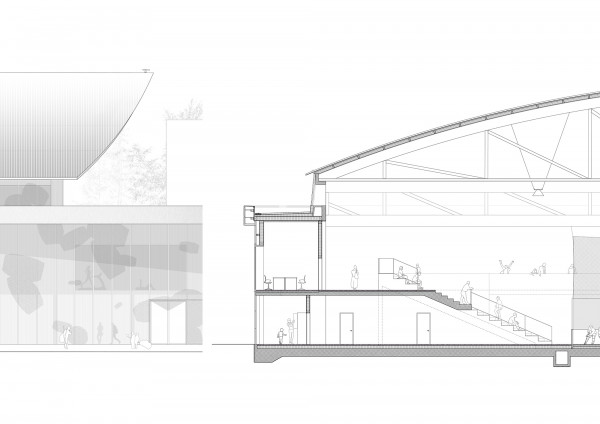 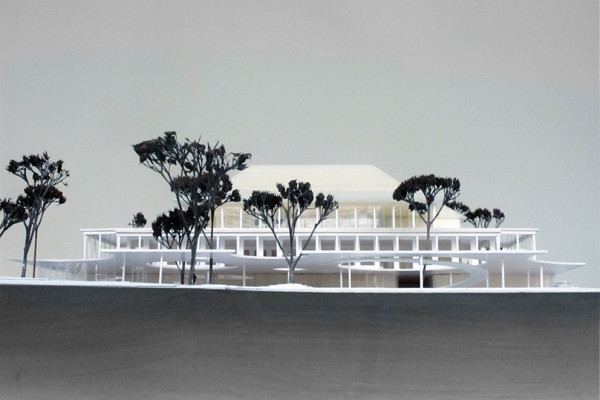