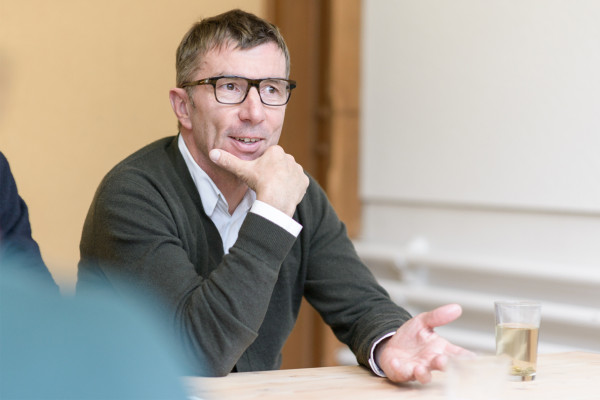 Harry Gugger studied architecture after an apprenticeship as a toolmaker and stopped studies in machine engineering and German literature. From 1984 to 1989 he studied at the ETH Zürich with Flora Ruchat and at the Columbia University in New York with Tadao Ando. 1990 began his collaboration with Jacques Herzog and Pierre de Meuron. As a partner he helped to develop Herzog & de Meuron from a small office to a global company.

From the outset, his practice was paired with manifold academic work. Since 2005 Harry Gugger is tenured professor at the EPF Lausanne (EPFL) where he founded the Laboratoire pour la Production d’Architecture. His laboratory was in charge of the National Participation of Bahrain at the Venice Architecture Biennale 2010 winning the Golden Lion award. In 2011 Harry Gugger transformed his laboratory into Laboratoire Bâle a satellite laboratory of the EPFL dedicated to urban and architectural design situated in Basel.

In 2010 Harry Gugger founded his studio HGS which works on projects of all scales with a focus on urban design. From this practice synergies emerge with the research of his laboratory at the EPFL. Besides many other engagements in juries and commissions Harry Gugger acts as a board member of the LafargeHolcim Foundation for Sustainable Construction since 2010. 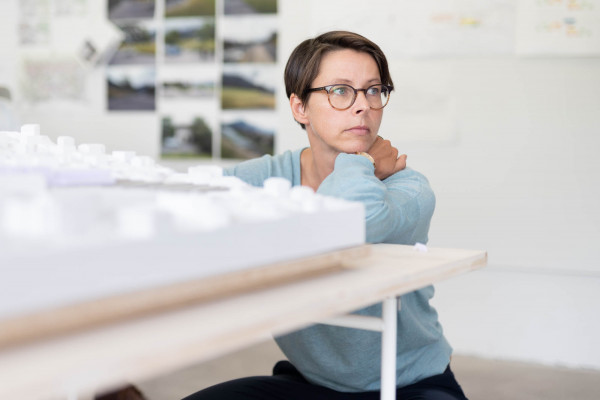 Henriette is an associate partner and co-founder of Harry Gugger Studio.

Within the studio she coordinates studies and competitions in the field of urban and residential design.

Prior she worked with AFF Architekten and Herzog & de Meuron as well as holding teaching positions at the EPFL and the Bauhaus University in Weimar.

Henriette studied at the Bauhaus University in Weimar and at the Chalmers Tekniska Högskolan in Goteborg. She graduated with honours in 2000 and lives in Switzerland since 2005.

Henriette Gugger is in charge of Finances and Human Resources. 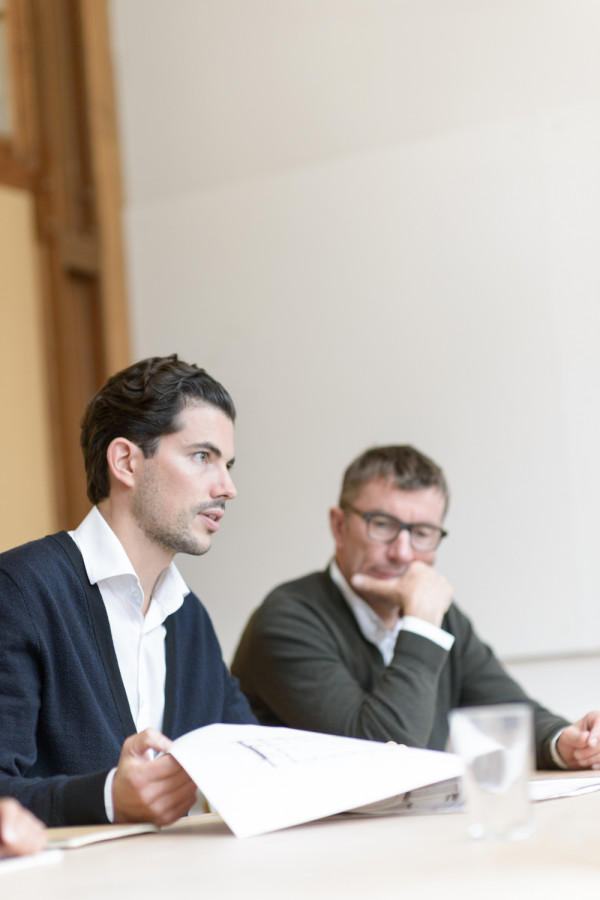 Michael Zink leads operations and organizes the work environment as an associate partner.

Michael started his involvement back in 2012 and managed a wide variety of projects from competition to execution. He was most recently responsible for the conversion of the historic Silo building on the Erlenmatt site in Basel and the school building competition in Schaffhausen. He is currently working on the competition for the Olten Art Museum and the high-rise project on the Müllerbräu site in Baden. Chris has joined Harry Gugger Studio in 2012 and is an associate partner since 2018.

With Harry Gugger Studio, Chris is leading a housing development in Basel and a rural farm development project in Devon, England. He has been instrumental in the execution of the Housing Allschwil project, the Limmatfeld in Zürich, Private House Bottmingen, Transitlager in Basel, as well as for projects in Ireland and the UK.

Chris has previously worked in architectural practices in Australia, Belgium, and Switzerland, including Santiago Calatrava, 51N4E and The Buchan Group.

His experience covers a wide-range of projects, such as a warehouse-to-office conversion in Australia, the C-Mine (conversion of an abandoned mine into a to cultural centre) in Belgium, TID tower in Albania, the Marina d'Arechi sailing club in Italy and the Museu do Amanhã in Brazil.

Chris has graduated with Honours from Curtin University, Australia in 2004 and has lived in Basel since 2008.

His previous work experience includes collaborations with architectural practices in Spain and Italy.

Gonzalo gained his MArch from ETSA Valladolid in 2013 with honours and undertook an exchange semester at the Università degli studi di Genova. 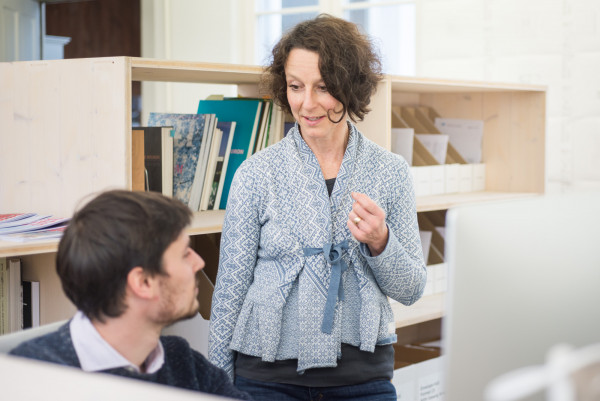 She operates as the managing office assistant and supports the team in all administrative matters.

Jessica studied at the Royal Ballet School in London and has worked as a soloist in numerous reknowned dance compagnies for twenty years. In addition to her work for Harry Gugger Studio she acts as a choreographer and dance teacher.

Mauro joined Harry Gugger Studio in August 2020 as an intern.

Mauro is currently studying in the Accademia di Architettura di Mendrisio where he just has completed his second year of his Bachelor studies under the professor Walter Angonese. 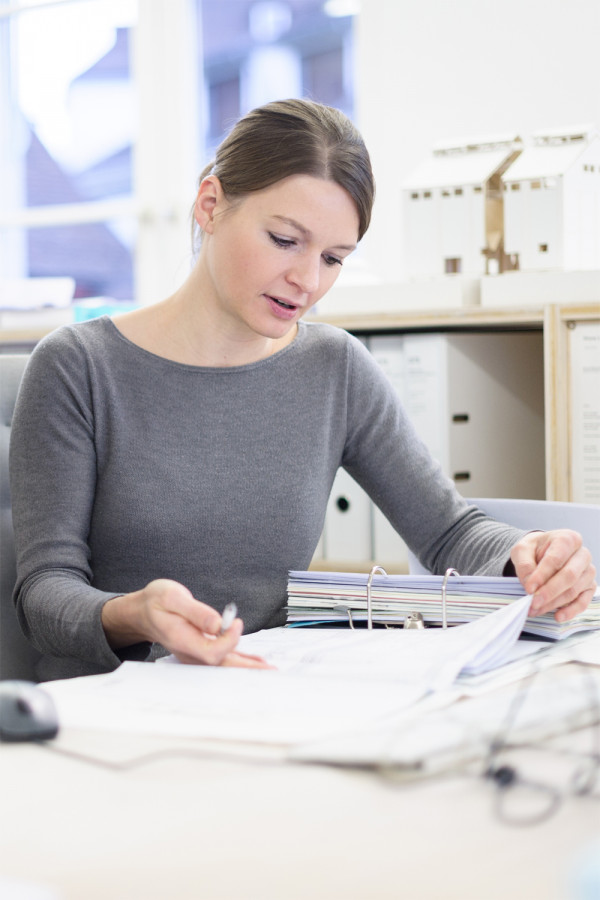 Franziska joined Harry Gugger Studio in 2014 as a senior architect.

She has been working at HGS on the design proposal of the Müller Bräu Areal in Baden, the detailed design of a listed building in Riehen and the new building 745 Viscosistadt of the Arts and Design faculty at the Lucerne University of Applied Sciences in Emmenbrücke. She has been working as a project architect for the Silo Erlenmatt in Basel. At the moment Franziska is working on a residential development project in Solothurn.

Before joining Harry Gugger Studio Franziska collaborated with architectural practices such as Atelier 5 in Bern, Architectural Design Group in Tauranga, New Zealand, Weberbrunner Architekten from in Zürich and Burckhardt+Partner in Basel.

Franziska graduated with honours from the Bauhaus University Weimar in 2008 and was a visiting student at Università degli Studi di Roma La Sapienza. She lives in Switzerland since 2009

Mark joined Harry Gugger Studio in September 2020 as an intern.

Mark received his Bachelor of Architectural Studies from the University of Waterloo School of Architecture in Canada. Over the course of his undergraduate studies, Mark completed a series of internships both in Architecture and Real Estate at offices in Toronto, Boston and New York City. 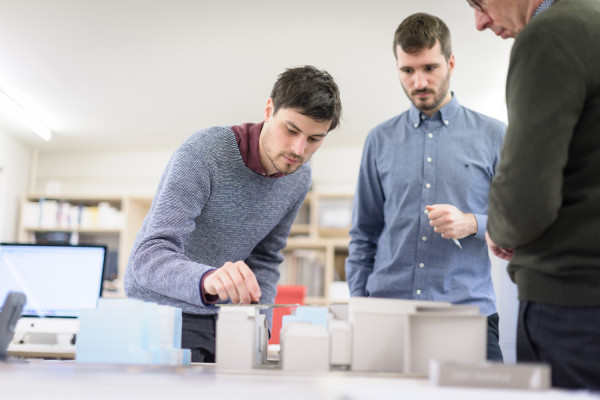 Thomas has joined the team of Harry Gugger Studio in January 2016 as an architect.

His work with Harry Gugger Studio includes competitions such as the Physics Department for the ETH Zürich, the Forum of the University of Zurich, the new Headquarters of Medisuisse in St. Gallen. He is now involved in an urban development project of the new City center of Birsfelden and the execution of the social housing project Hirtenweg in Riehen.

Thomas previously collaborated with various architectural practices such as Parc Architectes in Paris and Auer+Weber+Assoziierte in Munich, where he worked on award-winning competitions.

He has received his MSc in Architecture from the Ecole Polytechnique Fédérale de Lausanne in 2015. During his studies he took part in an exchange program at the Technische Universitat München. Thomas is a French citizen and lives in Switzerland since 2008. 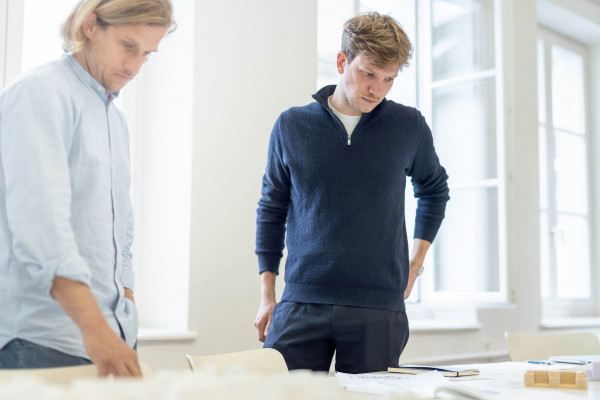 Sven has been employed as an architect at Harry Gugger Studio since 2020.

He completed his master's degree in architecture at the Technical University of Braunschweig in 2020 under Volker Staab. During his studies he worked as a tutor at the Institute for Experimental Design at the Technical University of Braunschweig and supervised students in their basic studies.
He spent an exchange semester at the Akademie der Bildenden Künste in Munich in the Baumschlager class.

He completed various internships at Chezweitz in Berlin and at Christ & Gantenbein in Basel, where he worked at the Landesmuseum in Zurich. 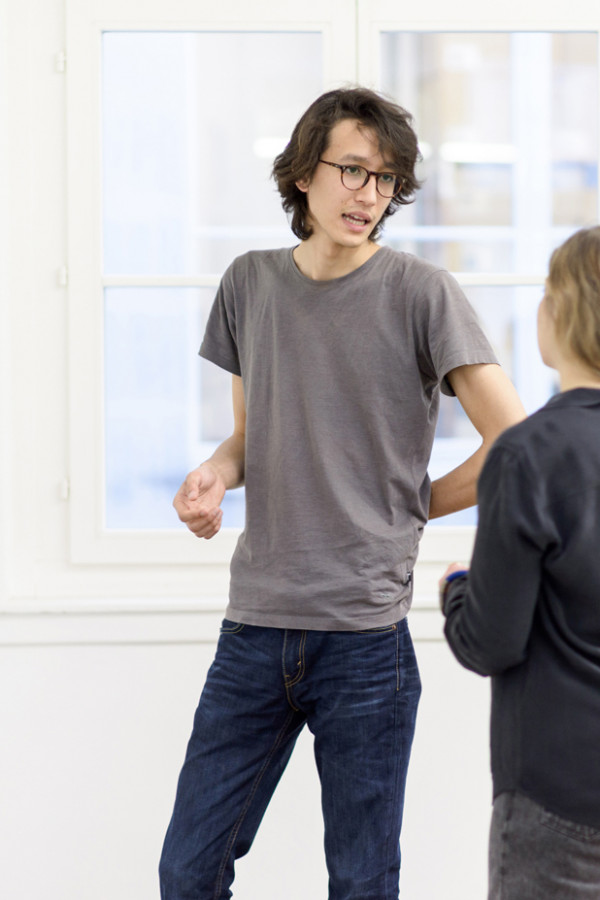 Currently he is working on the façade design of the new building for the Arts and Design faculty of the Lucerne University of Applied Sciences in Emmenbrücke as well as competitions and urban studies.

Prior to working with HGS he collaborated with Eric Lapierre Experience in Paris and as an intern with Atelier Bow-Wow in Tokyo.

He graduated in 2015 with a Msc of Architecture at Accademia di Architettura di Mendrisio, Switzerland.
Furio is Italian and lives in Basel since 2016

Aurelia has been employed as an architect at Harry Gugger Studio since 2020.

In 2016 she completed her Master of Architecture at ETH Zurich. She spent an exchange semester at the Accademia di Architettura in Mendrisio.
During her studies Aurelia completed an internship with Christ & Gantenbein in Basel, with Anne Holtrop in Amsterdam and in Tokyo with Sou Fujimoto. Seminar weeks and workshops took her to Iran, Ethiopia and Chile.

She gained experience as an architect in a major construction project with Barkow Leibinger in Berlin and then with Christ & Gantenbein in Basel by participating in award-winning competitions and by planning and executing projects of various sizes. 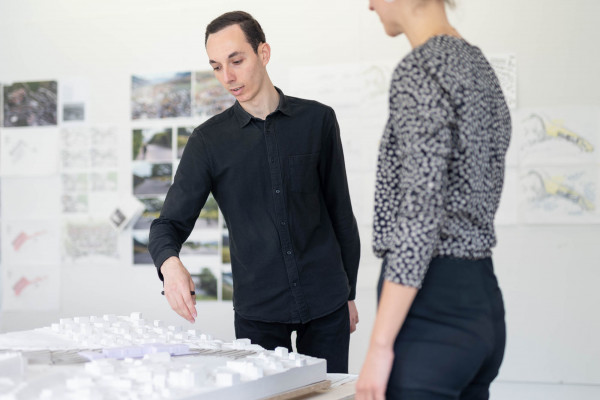 He is currently working on competition projects. His previous experiences include collaborations with architectural offices in Italy and Spain.

Andrea graduated in 2019 from Accademia di Architettura di Mendrisio. In 2018 he took part to the special section The Practice of Teaching at La Biennale di Venezia. He was born in Italy and lives in Switzerland since 2013. 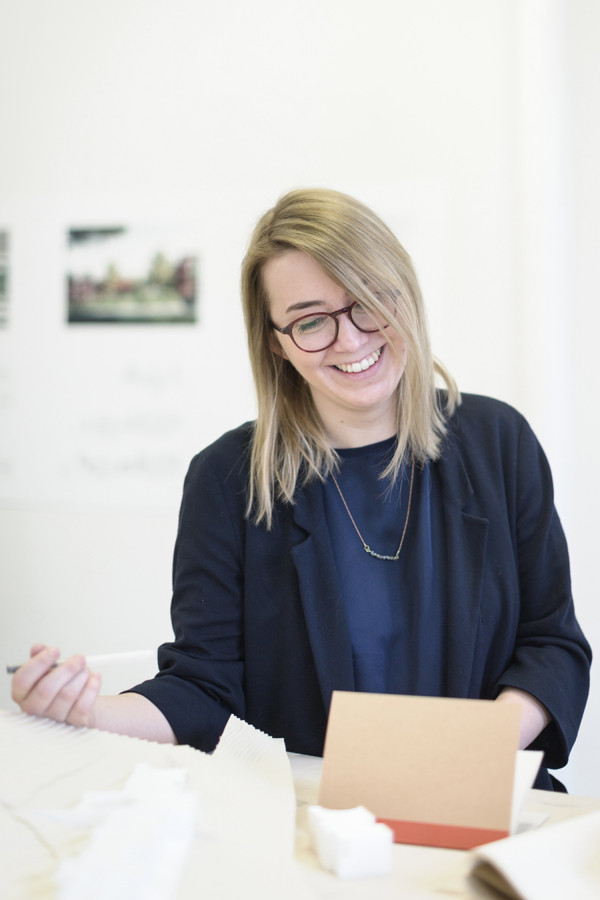 Stanislava is a project architect who joined Harry Gugger Studio in 2014.

Her work in the studio includes urban studies, competitions and execution projects, amongst other the High Schools Masterplan in Muttenz and the Transitlager in Basel. She is currently working on the Spenglerpark residential high-rise in Basel.

Stanislava previously worked on projects within architectural practices in Belgrade, Graz and Zürich and as a teaching associate at the courses 3D Visualisations CAAD and Design Studio “Space and Form – Design Elements” at the University of Belgrade.

Stanislava holds a MArch from the University of Belgrade’s Faculty of Architecture and a MAS in Computer Aided Architectural Design from the ETH Zürich. 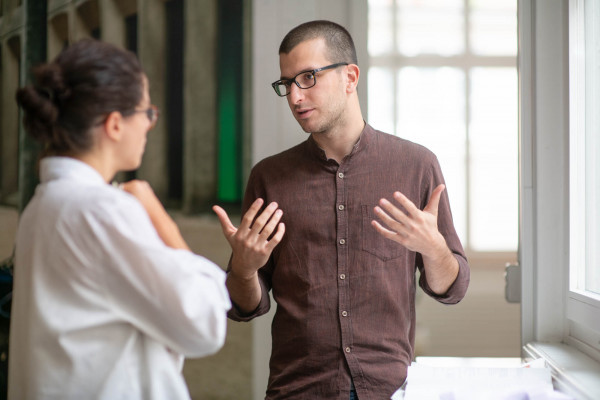 Giovanni has joined Harry Gugger Studio in 2018 as an architect.

He is currently working on a farm development project in Devon, in the UK. His work with HGS includes also urban studies and competitions.

Prior to HGS, he was an architect at Christian Kerez in Berlin. Giovanni has graduated in 2017 with a MSc of Architecture at the Accademia di Architettura di Mendrisio, Switzerland. During his studies, he collaborated as an intern with Made In (Zurich/ Geneva), Sangath (Ahmedabad) and NW Architekten (Basel). 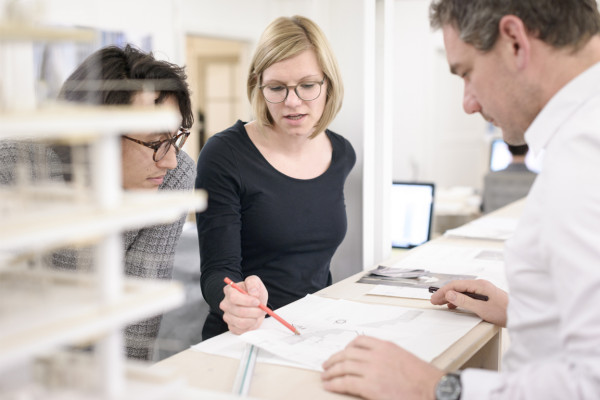 Caroline joined Harry Gugger Studio in 2016 as a senior architect.

Caroline brings a wealth of knowledge in the field of design and execution to the studio. Between 2012 - 2015 she managed projects for private clients throughout all project phases at weberbuess Architekten in Basel and directly after graduating she worked on a variety of award winning urban design and housing competitions.

She is currently responsible for the execution planning for the new building of the Arts and Design Faculty of the Lucerne University of Applied Sciences in Emmenbrücke.

Caroline studied at Technische Universität Darmstadt and EPFL and graduated in 2011 and is living in Switzerland since 2012. 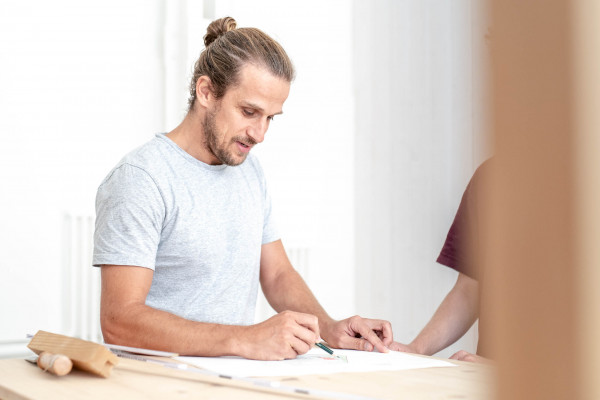 Harald has joined Harry Gugger Studio in July 2018 as a senior architect.

He has completed a carpentry apprenticeship and worked as a journeyman in Bavaria, has then graduated as an architect at the University Regensburg followed by a master degree in timber construction at the University of Applied Sciences Rosenheim. From 2006 to 2013 Harald worked for Herzog de Meuron (for projects such as Vitrahaus, Riehen Nature Bath, Ricola Kräuterlager), until 2016 at Burckhardt & Partner (for various competitions) and until 2018 at Miller & Maranta (Kindergarten Riehen).

Harald ist project leading architect for the the social housing development Hirtenweg/ Riehen and a multy-storey project for Medisuisse. 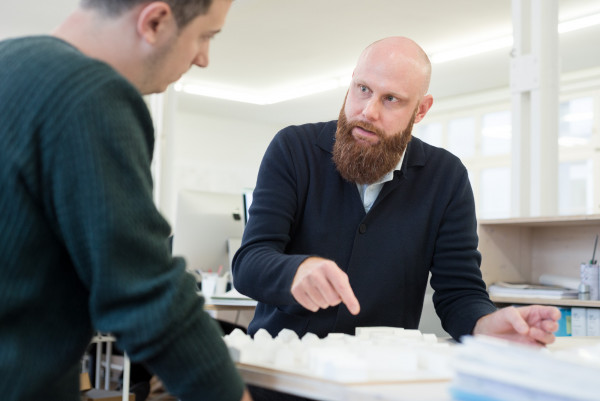 Gunnar is a senior architect and has been with Harry Gugger Studio since 2017.

In the past he acquired skills in planning and execution with projects of very different scales. This experience ranges from the furniture detailing to developing and running a housing estate.

His professional career led him in the architecture firm of Dan Pearlman and Mutabor Design, Holzer Kobler, Weberbuess and Bauart Architekten. At Bauart Architekten, he was a long-standing employee in the planning and execution phases of various buildings.

Gunnar studied at the University of Kassel and graduated in 2007. During his studies he supervised the interdisciplinary basic studies of architecture, urban planning and landscape architecture. Since 2007 he lives in Switzerland. 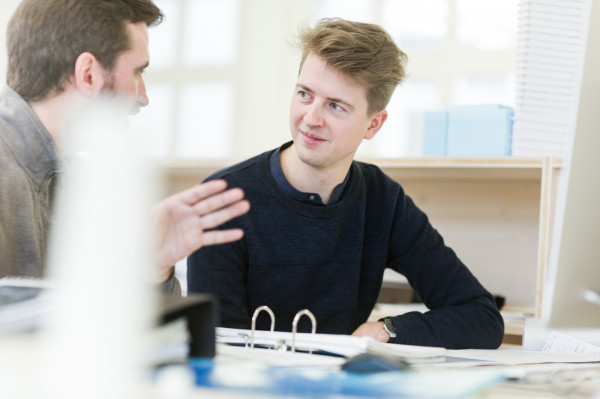 Victor is a French architect who started working at Harry Gugger Studio in 2017.

Before joining the office, he worked as an architect and project leader at DeA architectes, Mulhouse in France. There, he was in charge of multiple projects, including public buildings and housings. He also gained experience through two collaboration in Paris, with Cut Architectures and Philippe Rahm architectes.

Victor gratuated with honors from INSA Strasbourg, France in 2014 under the supervision of Prof. Guillaume Delemazure.

Pierre joined Harry Gugger Studio as an architect in 2020

Currently he is working on urban densification projects around Basel.

Pierre graduated from EPFL in 2020. His diploma project under the supervision of prof. Harry Gugger has been awarded the Arditi Prize. He was a former student of LABA and participated in the publication Fez Lessons.

He has spent a year in Chile has an exchange student in the PUCV Valparaiso.

Between his studies, he collaborated with NP2F in Paris on the IMVT project, and with Guillermo Hevia Garcia in Santiago de Chile.